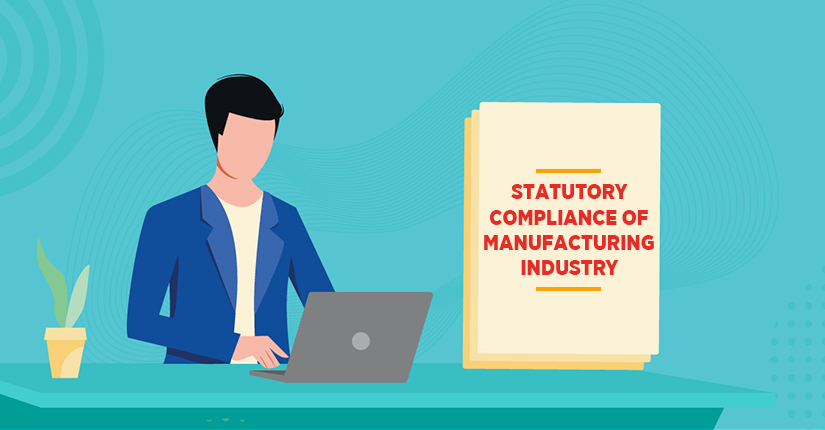 Statutory compliance refers to practices of a company to stay compliant with laws passed with a local, state, or central government. Manufacturing industries involve a lot of human resources and potential in the form of its many labourers, employees, and workers. Therefore, it becomes essential for organizations in the manufacturing sector to protect the interests of their workforce.

Various Statutory Compliance to be followed by the Industries :

Eligibility
A person shall not be qualified for being engaged as an apprentice to undergo apprenticeship training in any designated trade, unless he

The Industries have to strictly comply with the child labour prohibition and Regulation Act 1986.The Industry should not employ children below fourteen to work and no employment for doing hazardous work.

This Act deals with the dispute between employer and employee. The objective of the Industrial Disputes Act is to secure industrial peace and harmony by providing machinery and procedure for the investigation and settlement of industrial disputes by negotiations.

The Minimum Wages Act, 1948 is a Central legislation aimed at statutory fixation of minimum rates of wages in the employments. This Act deals with the minimum wages that have to be paid or given to the labourers.

This particular Act deals with the trade union formed by the workers to represent their working condition or to put forward their demand which they desire to get fulfilled by the employer.
The Act mentions the concept of collective bargaining which enables the workers to negotiate with the employers regarding working salaries, working condition, benefits and compensation.

The Act contains provisions on the health, safety, working hours, leave and welfare of workers; inspecting staff for factories; hazardous processes in factories; the employment of young persons (children and adolescents); and penalties for contravening the provisions of the Act.

The Working hour shall not extend to more than 9 hours daily and 48 hours weekly and a
special provision regarding employment of women before 6 P.M and after 7 A.M.

This Act deals with the compensation provided to the workers who are injured in an accident in his course of employment or gets occupational diseases peculiar to his occupation.

This Act is enacted to provide the workmen with the compensation as an aid for their
treatment.

Other Statutory Compliance to be followed by Industries
Employees’ Provident Funds
EPF & ESI- Forms used and Legal Compliance
All business entities with 20 or more than 20 employees are mandated to be members of the EPFO.

Withdraw Permission
You can withdraw the maximum amount of 90% of the total corpus, if you choose to withdraw the corpus 1 year before your retirement.

The event of loss of job has also been considered in the latest EPF withdrawal rules. According to these rules, 75% of the accumulated EPF corpus can be withdrawn 1 month after leaving the job. The remaining 25% can be withdrawn after 2 months of unemployment.