Economy Status In India Under Modi-Led Government Till 2020 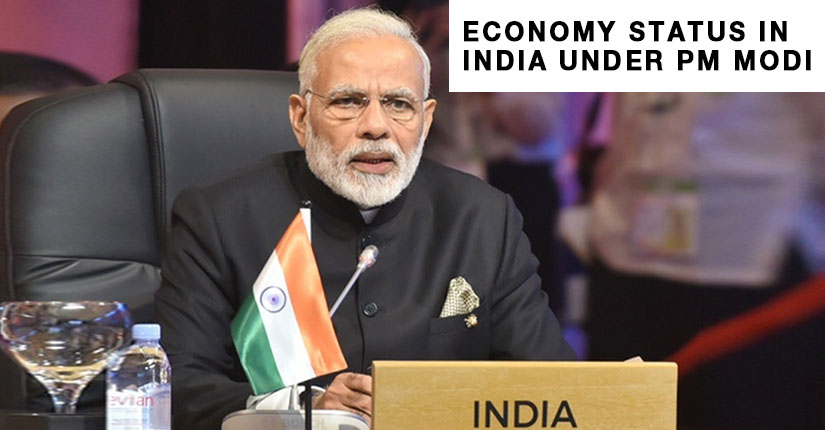 Narendra Modi ran his government against the then existing government led by the Congress party which had mismanaged the economy, fallen into decision paralysis and faced major corruption scandal after another. Modi became the answer to the woes of the citizens of India during the Lok Sabha elections in 2014 when there was a public expectation that he would usher in pro-business policies of the kind that he was known to have encouraged when he led his home state of Gujarat. He campaigned with humorous criticism to then existing Government and hopeful slogans. One of such slogans – “minimum government, maximum governance” that led his Bharatiya Janata Party (BJP) to a sweeping general election victory in 2014 and followed that with a landslide re-election in 2019. In the year 2014 when Modi- led government came into power, the Indian economy was around $1.71 Trillion. During the year 2014-2019 i.e. the First tenure of Modi government, Indian economy grew by an average of 7.5% every year and became 6th largest economy in 2017 by surpassing France, and 3rd in terms of purchasing power parity (PPP) in the world.

In the opening gambit of Modi 1.0 era, it implemented a range of schemes and programmes to revive India’s economic growth, ensure employment to crores, eliminate cross border terrorism, curb corruption and black money flowing in the Indian economy among others. Key initiatives taken by the government during the first term under the leadership of PM Narendra Modi are hereby discussed.

The reforms and developments introduced in the Modi 1.0 era are expected to be strengthened in Modi 2.0 era. Prior to the Lok Sabha elections held in 2019, the government announced, the target $5 Trillion Economy by 2024 i.e. upcoming five to six years. The Centre has brought in the Taxation Laws (Amendment) Ordinance 2019 to make certain amendments in the Income-tax Act 1961 and the Finance (No. 2) Act 2019 to sustenance the intent shown by the government. The government has slashed basic corporate tax rate to 22% from 30%, Effective Tax Rate 25.17% inclusive of all surcharges and cess for such domestic companies and also for new manufacturing companies it has been cut down to 15% from 25%, the effective tax rate after surcharges and cess will be 17%. However, the decision made the government to lose 1.45 Lakh crore during the year.
The biggest question that arises was why this decision has been taken by government & how will it absorb these tax cut. The rationale was for India to target US FDI amidst in trade war with China to achieve its $ 5 Trillion Economy milestones. China has been growing rapidly in last few decades and has become economy super power. Consequently, US started imposing massive Trade tariff sanction on imported goods from China. As a result of which US based companies left China. The US tariffs on China have made other players more competitive in the US market and led to a trade diversion effect. During this time period India was expecting that more and more US companies who will leave china will prefer to come to India but businesses in India faced some challenges, including the need for land and labour reforms, as well as the lack of infrastructure.