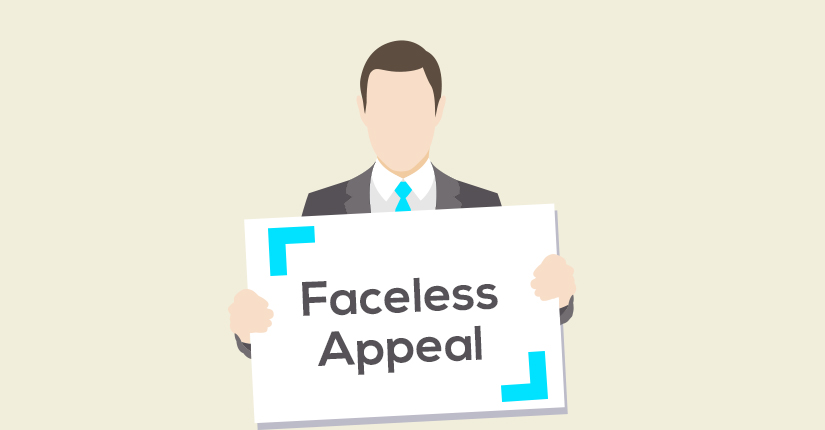 Ministry of Finance introduced Faceless Appeal Scheme 2020 with effect from 25 September 2020 vide Notification No. S.O. 3296(E), allowing faceless hearing and filing of the appeals on the Income Tax matters. An automated allocation system will facilitate random allocation of cases by using artificial intelligence or any other suitable technology thereby, eliminating the discretion in the examination and selection of cases.

The proceedings in tax appeals will be through an ‘e-appeal’ facility under the registered account of the appellant in a specifically designated web portal for e-appeals.

Section 250(6A) of the Income Tax Act authorises the Central Government to notify an e-appeal scheme for the disposal of the appeal that will be resulting in eliminating the interface between the CIT(A) and the appellant in the course of appellate proceedings to the extent technologically feasible. Thereby, introducing an appellate system with dynamic jurisdiction in which appeal shall be disposed of by one or more CIT (Appeals).

Therefore, new platform will ensure that the tax site is transparent and will be allowing users to dispute any tax claim without consulting the authorities. This will allow taxpayers to make submissions from their homes and save time and resources.

What are Centres & Units in Faceless Appeal Scheme, 2020?
The board may set-up the following centres & units and specify their respective jurisdiction for the purpose of the Scheme:

Regional Faceless Appeal Centres (RFACs): Its major function is to facilitate the conduct of e-appeal proceedings. They shall be vested with the jurisdiction to dispose appeal in faceless manner.

Appeal Units: It shall perform the function of disposing faceless appeal. All communication with respect to information, document, evidence or any other details between the Appeal Unit and the appellant or any other person or the National e-Assessment Centre (NeAC) or the Assessing Officer (AO) shall be done through the NFAC.

Assignment of appeal: Through an automated allocation system*, the NFAC will assign the appeal to a specific appeal unit in any one RFAC.

*Automated allocation system means an algorithm for randomised allocation of cases, by using suitable technological tools, including artificial intelligence and machine learning, to optimise the use of resources.

Admission or rejection of appeal: Where an assessee has filed an appeal after the expiration of time specified in section 249(2) of the Income-tax Act, the Appeal Unit may admit such appeal if it is satisfied that the appellant had sufficient cause for not filing the appeal within the said time.

In any other case, it may reject the appeal. The Appeal Unit is required to intimate about such acceptance or rejection to the NFAC.

The Appeal Unit may also request to NFAC to obtain a report of the NeAC or the AO on grounds of appeal or information, document or evidence filed by the appellant.

Notice by NFAC: The NFAC shall serve a notice, specifying date and time, to seek such information, document or evidence or report as may be specified by the Appeal Unit or as may be relevant to the appellate proceedings. The notice can be served on appellant, NeAc, AO or any other person.

Filing of Additional Ground: The appellant may file additional ground of appeal in such form, as may be specified by the NFAC, specifying therein the reason for omission of such ground in the appeal filed by him.

The Appeal Unit, after considering such request, may prepare a notice directing the appellant to produce such document or evidence or for examination of any other person being a witness. Such notice shall be send to the NFAC.

NFAC shall service such notice to appellant. The appellant shall file his response within the date and time specified in the notice or such extended date and time as may be allowed on the basis of application made in this behalf. NFAC shall send the response received from appellant to Appeal Unit. In case no response is received, NFAC shall inform the appeal unit.

Draft Order related to enhancement of assessment/penalty/reduction of refund: The Appeal Unit shall prepare draft order in accordance with the provisions of section 251 after considering:

Review of Draft Order: Upon receiving the draft order from Appeal Unit, it shall be sent to another Appeal Unit for review in case where the aggregate amount of tax, penalty, interest or fee, including surcharge and cess, payable in respect of disputed issues, exceed specified amount.

Are there any deficiencies in the Scheme?

Conclusion
The rules & procedures laid down by the Faceless Appeal Scheme, 2020 are on the similar lines with the Faceless Assessment Scheme, 2019. It seems that the Central Government has framed this scheme without understanding the difference between an assessment proceeding and appeal proceedings.

The Central Government is yet to notify such circumstances & such class of persons where the appellate proceedings shall be done in faceless manner according to this scheme. It is likely that Govt. might implement faceless appeal in phase manner like what we have seen under Faceless Assessment.