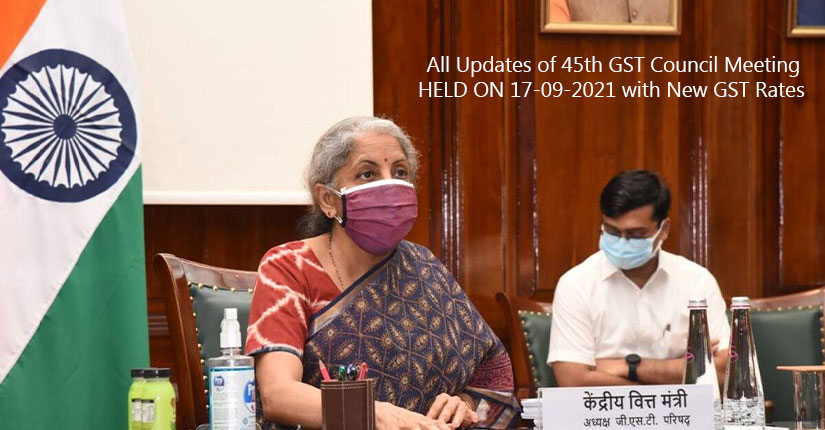 Finance Minister Nirmala Sitharaman on Friday Conduct the 45th meeting of the Goods and Service Tax (GST) Council in Lucknow. This was the Council’s first in-person meeting in almost two years since the start of the Covid-19 pandemic.

Reducing taxes on life-saving medicines, bringing petrol and diesel within the ambit of indirect taxation, rationalizing an inverted duty structure, and treating food delivery apps as restaurant services were a number of key points on the agenda.

FM Sitharaman started the conference with announcing the GST Council’s decision to grant tax concessions on life-saving drugs. Furthermore, there’ll be no GST on Amphotericin B, Tocilizumab till day this year.

The points discussed in meetings are :-

The FM announced that two groups of ministers are going to be constituted to appear into certain changes within the GST regime. One group would take a look at rate rationalization issues and submit a report in two months, while the second group checks out related problem with e-way bills, fastags, technology, compliance, composition schemes.

It was also said that GST compensation cess till will have to be extended March, 2026.

The GST Council exempted national permit fee charged by states for operation of products carriage. A discount in GST rate on biodiesel -supplied to OMCs for blending with diesel-from 12% to five was also announced. The Council approved increasing the rates of GST on railway part and locomotives to 18% from this 12%.

An inverted duty scheme on footwear and textiles are going to be corrected from January 1, 2022, said Sitharaman. Now 12% GST are going to be applicable on specific renewable devices and pens will now attract single GST rate of 18%.